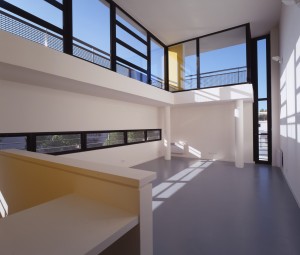 Paris has long had a deep relationship with the lives and work of its artists. The city has been both home and inspiration to some of the greatest artists of the 19th and 20th centuries and to thousands more seeking such fame. Still, many greats and near-greats spend a lot of time searching for affordable working and living spaces.

To maintain its cultural reputation, to help a few artists, and to take some pressure off steadily rising rents, the Cultural Department of the City of Paris owns and rents out a small number of art studios. The department builds new studios throughout Paris whenever it can.

One new building, comprising four studios and six apartments, was recently finished in the 18th arrondissement in the north of Montmartre and Sacre Coeur. It is part of a redevelopment project that includes new apartment buildings, a school, an office building, and a public square.

Places for Living and Working 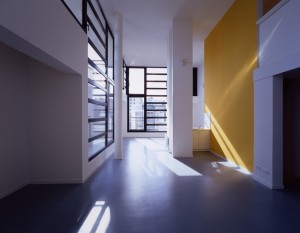 The artists’ studios are sited at the end of a row of buildings of mixed uses. Facing the public square, the apartment/ studio building is surrounded on three sides by streets. Through its position on the square, next to a new school building, and because of its mixed use, the building plays an important role in the success of the redevelopment project.

Designed by the Parisian architects Pascal Quéré and Guy Vaughan, the artists’ apartment/ studio building totals 8600 square feet (800 square meters) on a 2060-square-foot (191-square-meter) site. The building was finished in September 2002 after one year of construction.

The residential portion of the program includes three two-room apartments and three three-room apartments. Each of the four art studios is linked directly to an apartment by an internal stair. The studios are constructed with a ceiling height of 15 feet (4.5 meters) to accommodate large sculptures and paintings. 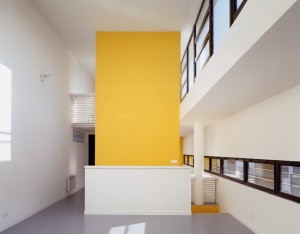 By positioning two high-ceilinged studios on the ground floor, it became possible to align the base of the building with that of the adjacent school building. The large horizontal windows of the top floor studios have the effect of disconnecting the roof from the rest of the building and elevating the roof toward the sky.

An open staircase and elevator are situated in the center of the building connecting to a small courtyard. The living rooms of the apartments occupy the corners and so receive light from two directions. The narrow form of the building makes it possible to daylight every room.

While the apartments appear well planned — if ordinary in form and appearance — the architects injected most of their energy into the studios. The large volumes allowed them to play with the space using narrow stairs and small mezzanines. This playfulness has created interesting and complex spaces. 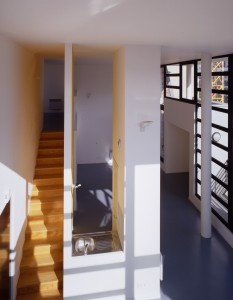 Quéré and Vaughan placed the building, through its architecture, colors, and materials, squarely in the realm of modern Parisian architecture. They used a dark stone to cover the base, white plaster and beech wood panels for the main facades, and black-painted steel and aluminum window frames.

Looking back through the Parisian history of artists’ studios, one notices a resemblance with an early building of Le Corbusier, the Ozenfant House and Studio (1924) in the southern part of Paris. It was designed by the architect for his friend, artist Amédée Ozenfant.

That building embodied some of the principles that Le Corbusier was to set out later in his famous « five points of architecture. » Especially noticeable is the idea of a rigid load-bearing skeleton around which interior and exterior elements, freed from any structural function, can be distributed according to other criteria. Thus, the horizontal windows extend across entire walls to provide an even distribution of light inside the house and studio. 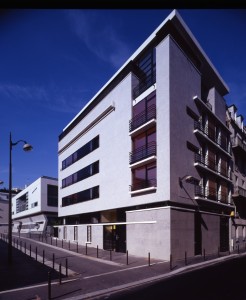 The outside of the building in Paris © Stéphan Lucas

It is easy, at first glance, to establish similarities between these two buildings, because of the strong horizontal lines in the windows, window sills, and balustrades, and the use of the corner windows with black steel frames. Ozenfant’s studio also features a play of volumes and mezzanines.

The similarities extend to functional details. Because the staircases are too small to accommodate large paintings, Quéré and Vaughan have integrated in their facades, as Le Corbusier did in the Ozenfant studio, large vertical windows through which the paintings can be hoisted.

But one should be careful in comparing buildings because the circumstances of their design are never the same. The studios of Quéré and Vaughan were a public commission, with an unknown future client, while the Ozenfant House and Studio had been developed in a close relationship between architect and artist.

Quéré and Vaughan have designed a building that offers to four artists a great place to work and to live. The building will play, through its high quality, a strong role in the development of the neighborhood. But they are following a tradition of Parisian architecture, not introducing a new way of thinking about architecture, art, and design, as their famous predecessor did.

Published in Architecture Week on the 19th February 2003