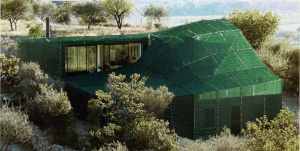 In southern France close to the village of Sommieres, a more traditional region of small individual houses, surprises the unusual appearance of the new house of M. Ami Barak.

In its outside form the building reflects the morphology of the surrounding landscape and its green fabric covering integrates into the natural environment. By shading the underneath concrete structure, it also helps to cool down the inside temperature in the hot and dry summer months.

Situated in the monument-protected zone of the nearby historic “Château Sommières”, it was important for the construction to harmonize with the surrounding landscape. The house had to be nearly invisible to get the permission to be built. 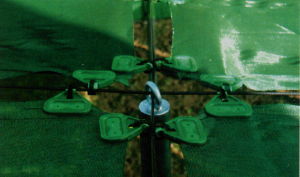 The tent-like construction method of the house © R&Sie(n)

Completed in December 2001 by the Paris-based architecture office of R&Sie…, the house offers seven rooms on 160 m2 and a 70 m2 terrace under the canopy, ready for a future construction of additional rooms. The tent-like covering is made of polyurethane fabric panels attached by plastic clips to carbon fiber wires and supported by 72 adjustable galvanized steel poles. The total costs for the construction were about 168 000 €.

It is the relationship between the free-formed envelope and the landscape, the tension between the light fabric and the heavy concrete structure that makes the Barak House an exceptional project in the French countryside.

Text published in the magazine Frame, 10/02

#Materials : #bamboo is an abundant resource. It grows fast absorbing more CO2 than what its future transformation process generates. It is resistant to humidity as it contracts and swells less than most of solid wood species which gives it a good stability #rethink #Ecology pic.twitter.com/MD2dZILM9U

The brochure of the @FIT 2022 workshop is now available on our website! You can now review the highlights of this enriching experience, including the students project proposals for the valuation of the Seine banks, here >> shorturl.at/agov4 #Rethink #adaptivereuse