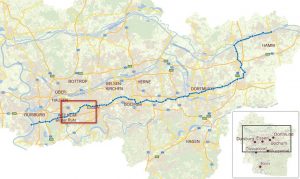 Germany has the image of one of the world’s car countries since Carl Benz invented the automobile in 1885 in Mannheim. In the 20th century mayor car manufacturers developed, like Volkswagen, Daimler-Benz, BMW, and became they shaped the most important industrial branch of Germany, mainly export orientated. The construction of a dense highway network without general speed limit reinforced the image. Only since the 1970-80th the growing awareness of the environmental and health problems for humanity through exhaust gases, besides other damages done by the extraction of crude oil and the production of petrol, casts some clouds over the car industry. The recent Volkswagen scandal added some trouble, but without mayor impact for the other German car companies. 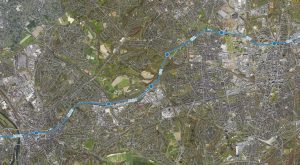 RS1 the built section in the Ruhrgebiet © RVR

Aware of these negative impacts on life quality and that an unlimited growth of car users is incompatible with the limited street space in cities, the German public authorities try a balancing act between satisfying the needs and wishes of its mayor industrial branch and offering alternatives in mobility to the population. Important investments have been recently announced for the modernization, enlargement and extension of the highway and street network until 2030. Other investments are foreseen for the development of rail- and waterways and for alternative mobility. In total 264,5 Billion Euro will be invested until 2030. 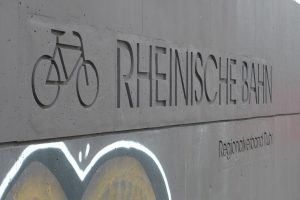 Also in the Ruhr region, a polycentric urban area in North Rhine-Westphalia. With a population of 8,5 million, it is the largest urban agglomeration in Germany, and third-largest in the European Union. The highway A40 crosses the region from west to east and is used in parts by up to 100.000 vehicle per day, creating regular traffic jams. The investment program foresees to partly enlarge the highway from two to three lanes in each direction. A challenge in the dense urban agglomeration of the Ruhr with housing built close to the highway. 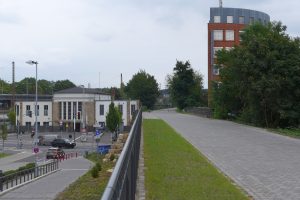 Simultaneous another kind of highway is under construction in the region, the Bicycle Highway n°1 (Radschnellweg RS1). Until 2022 it will be built parallel to the A40 on over 100 km from the city of Hamm to Duisburg. Making it the longest bike highway of Europe with an estimated cost of about 184 Million Euros. It will link 10 cities and 4 universities. Estimated 1,8 million people live in a distance of 1km to the RS1 and 580 000 of them are students and employees. The Regional Association Ruhr (Regionalverband Ruhr) an affiliation of 53 towns in the Ruhr region, commissioned a  feasibility studies with estimated that 50000 commuters could switch from their car to ride a bike on the new RS1. 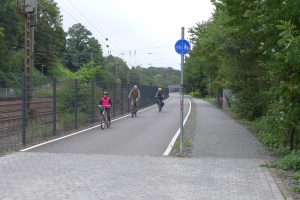 The bicycle highway will be about 4 meters wide so that faster cyclists can overtake slower ones in both directions. It is designed with separated lanes for bikers and pedestrians and with few intersections with major roads to enable cyclists to travel fast within and among the different cities. Security, comfort and speed are the main criteria for the design. 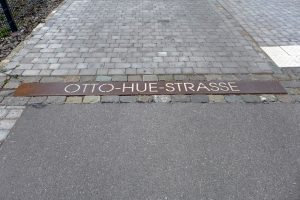 A first section of the RS1 of 10km has been completed between the train station of Mühlheim and the university of Essen. It is built on a former railway line, the Rheinische Bahn, and uses its tunnels and bridges to avoid intersections with the street network. Former train signals indicate the historic use of the track. On the 10km only one intersection with traffic lights interrupts momentarily the bicycle ride. Steel plates integrated in the ground indicate the crossing streets. Generally it is quiet track, away from cars and pollution, nearly flat, running along railway lines, through green spaces and passing by industrial and housing areas. Through its standardized width, its light topography and somehow monotonous landscape, it is not a picturesque setting, but a useful and effective support for urban mobility. 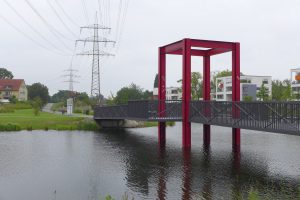 Germany is not on the forefront of the bike highway development. Countries like the Netherlands and Denmark started building their network several years ago and continue to expand it. But the polycentric structure of the Ruhr, similar to the Netherlands with its dense network of cities and urban infrastructure, might be well positioned to develop this new model of mobility. Additional the growing popularity of electric bikes in Germany allow for its users to cover larger distances and enable older people to move easier on bicycle. In 2015 more than 2.1 million e-bikes were already circulating in Germany. 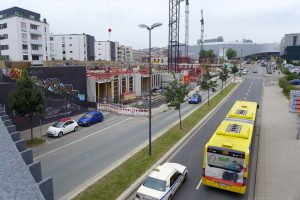 But remains the question, if it is sufficient to simply develop the active mobility network to bring commuters from car to the bicycle ? The Institute for Economic Research (Institut der deutschen Wirtschaft) foresees generally an increase of commuters. In 2005 38,8 million people commuted in Germany, in 2014 it rose to 42,6 Million and the trend is growing. Will these new commuters cover distances up to 5 or 10 km on bicycle, when the modernization of the highway network offer a more fluid circulation during a few years? Is the development of an offer in active mobility without restrictive measures on individual motorized mobility is sufficient to reach the objectives. Personally I doubt this, but is it also hard to imagine that German public authorities will implement restrictive measures on car traffic, its mayor industrial branch. In the meantime the RS1 offers an interesting case study and a welcome initiative.