Carmes Polytechnique, housing in the heart of Paris – France

The necessity of the reduction in energy consumption

Reducing energy consumption is one of the major challenges for the energy transition. The buildings in France represent the largest energy-consuming sector. Its part in the global energy consumption reaches nearly 45% in 2015 (Source: Ministry of the Environment, Energy and the Sea). In consequence the energy renovation of existing building plays a major role. Most of today’s existing buildings have been build before 1975. That means before the first thermal regulation from 1975, that had been introduced following the first oil crises of 1973. It only applied to new residential buildings, imposing a wall insulation and a regulation of heating systems.

In the case of Paris, as shown in the diagram, 53% of all housing have been build before 1914, since its foundation as the Roman city of Lutetia in 50bc. It followed a very intensive period of housing construction between 1918 and 1975. During just 57 years another 33% of all housing in Paris have been built. 1975 marked the end of a period with a strong economic growth in France, called the ‘Trente Glorieuses’, and a reduction of the housing construction in the following years.

In comparison the current thermal regulation (RT2012) aims a consumption of primary energy of 50 kWh ep/m2/year for new construction. But today only 1 % of the existing social housing stock reaches this goal. So the reduction of the energy consumption is one of the main objectives for its renovation. An objective linked with the reduction of greenhouse gas emissions and the charges of energy costs for the tenants.

The renovation of the social housing estate situated in the Rue des Carmes and Rue de l’Ecole Polytechnique in the 5th arrondissement of Paris, conducted by the architecture offices Atelier de la Seine and Rethink, includes these objectives.

Simplifying the accessibility of the staircases © ADS Rethink 2017

This social housing estate with 63 flats has been built between 1930 and 1934 in the period of the construction of the so called « Habitations à Bon Marché (HBM) ». This typology of housing for the working class has been generally employed from 1894 until 1949. It marked the beginning of the construction of social housing as an initiative and mission of the public authorities. Before 1894 it had mainly been the role of the industrial employers to provide workman’s dwelling, leading in many cases to indecent and insalubrious housing conditions.

Two characteristics differentiate the HBM from the social housing build after 1949. On the urban scale the HBM are integrated in its urban context, while after 1949 social housing was often built in the suburban  areas, detached from its surrounding of industry, individual housing or fields. On the architectural scale the HBM are easily recognizable by their apparent brick façade. Brick had been used before in the housing construction, but rarely as an apparent building material on the main façades. The Haussmann buildings of the 18th century are recognizable by their stone façades. And after 1949 prefabricated concert elements became the main construction material.

In Paris about 38 000 dwellings are part of the HBM typology, mostly build on the Boulevards of the Marshals that encircle the city of Paris near its outermost margins. 81 % of the HBM have been built between 1926 and 1939 (Source: Les Habitations à Bon Marché de la ceinture de Paris : étude historique, 2017). An important effort of the public authorities at this time and between 1918 and 1939 36% of all housing construction in Paris were of the of the HBM typology 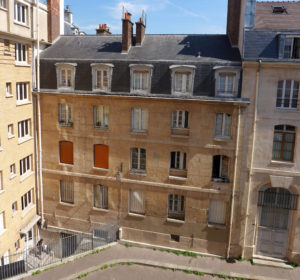 The housing estate Carmes-Polytechnique is one of the very rare HBM built in the historic centre. It is located in the historical district of the Sainte Geneviève mountain, on its North East slope just blow the Pantheon, and in the perimeter of the ancient Roman city of Lutetia.

A part of this housing estate has been built in the 17th century and belonged to the college of the Lombard. Late the college was partly demolished, leaving the central chapel, that became the church Saint-Éphrem-le-Syriaque, as it is today. In the 1930th a leftover of this college of the Lombard was attached in an inept manner to the new construction of the housing estate Carmes-Polytechnique. 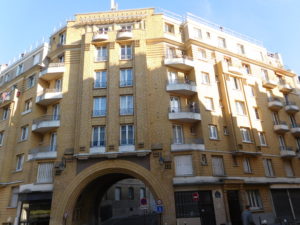 This new housing estate develops along three streets, the rue des Carmes leading uphill to the Pantheon, the rue de l’École Polytechnique and the impasse des Boeufs. Three entrances lead to four staircases, as the staircase of the 17th century building had been attached to a new entrance on the rue des Carmes. The 1930 buildings have been constructed with two different façades. Manly with the typical HBM brick façade, and with a non-bearing stone cladding on the façades that frame the view to the historic church Saint-Éphrem-le-Syriaque.

The social landlord Paris Habitat commissioned our architecture offices Atelier de la Seine and Rethink in 2017 to plan and supervise an extensive renovation of the buildings and flats, with a focus on the energy efficacy. For this we asked the engineers office Pouget Consultants to join our team. As the renovation will be conducted in an occupied site, the landlord commissioned the sociologists office Le Frene to contact all tenants individually and to explain and discuss on the coming renovation works.

Today the housing estate has no major defects, but a combination of different deterioration that make the overall renovation necessary. We divided the interventions in four categories: the urban integration, the envelope (facade and roof), the common areas and the flats.

The site is densely build and mostly surrounded by concrete and stone surfaces. While summer temperature generally rise in France though climate change, this is even emphasized in larger cities through the effect of the urban heat island. The summer temperature in Paris is already about 3-4°C higher than in the rural areas surrounding the city. This leads to physical stress for children and older people during heat waves. To counter steer we identified exterior spaces that could be greened, including the roof terraces. By the redesign of these spaces we also improve and clarify the accessibility of the different buildings.

The work on the envelope concerns mainly the improvement of the insulation to reduce the thermal losses. Interventions on the insulation of the roof and the interior surface of the facades, the replacement of all windows and landing doors of the flats and the installation of airlocks in the entrances areas. An exterior thermal insulation, even if more efficient, is impossible because of the historic value of the brick and stone facades, so we foresee a cleaning and reparation of these façades.

The common areas on the ground floor are not adapted to today’s needs. There is not enough space for waste containers, nor baby strollers or bicycles and hardly any space for the encounter of the tenants. They are mainly functional and do not encourage social interaction of the tenants. In our proposal, we enlarge the common areas to provide these necessary spaces for the comfort of the tenants and propose to create a leisure spaces, like a common green backyard and a rooftop terrace.

The renovation of the apartments focus on the technical installations and the kitchen and bathrooms. The electrical installations have to been renewed according to norm and the older gas boiler replaced by condensing gas boilers. A mechanical ventilation system for the kitchen and bathrooms has to be provided, as its absence is leading to a higher degree of humidity in these rooms. Over the years and especially in winter, when the tenants reduce the natural ventilation to avoid heat loss, mildew appears in some spaces. We propose to reuse the former chimney flues for the condensing gas boilers and mechanical ventilation to avoid the complex creation of new vertical ducts.

In the original layout of the flats the toilet is accessible from the corridor and ventilated by an opening in the wall towards the bathroom. The bathroom itself is accessible by the kitchen and provided with a small window. In previous renovations the creation of an independent entry to the bathroom from the corridor had been tested in several flats. But its layout reduces considerable the space in the already small kitchen. Our discussions with the tenants showed that they generally prefer the original layout with the access of the bathroom through the kitchen, than losing space in the kitchen.

Proposed interventions in an a flat © ADS Rethink 2017

The renovation will take place in an occupied site to avoid the temporally relocation of the tenants. A relocation is cost-intensive (relocation, rent of extra space) and psychologically difficult for older tenants. In consequence all interventions around and in the apartments have to be carefully planned, coordinated and discussed with the tenants so that they are efficient, fast, clean and of good execution. Two empty flats are furnished to serve as an alternative in special cases, like for tenants who do night work and need to rest during the day.

Generally our interventions have three objectives. A well planned general renovation improving the habitability of the flats and the comfort of the tenants. A sustainable renovation with the reduction of energy efficiency and the use of natural materials instead of petrochemical materials. A renovation going beyond the technical aspects by including additional common spaces, improving general accessibility and contributing to a better urban climate by greening of open spaces.

About the office Rethink
The office Rethink, architecture and urban planning, works on the sustainable transformation of urban fabric and metropolitan areas, the quality of public spaces, and the renovation and restructuring of existing buildings. Based in Paris the office is particularly implicated in the development of the Paris agglomeration, also called “Grand Paris”.
> (English) Link to the housing renovation project ‘Carmes’ of the office Rethink
> (Français) Lien vers le projet de rehabiliation ‘Carmes’ de l’agence Rethink

Author: Christian Horn is the head of the architecture and urban planning office Rethink in Paris, France