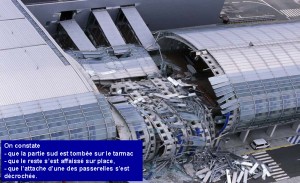 On May 23, 2004, a portion of roof at the Charles de Gaulle International Airport in Paris collapsed, killing four travelers and injuring three more. Ten months later, an investigation of the innovative vault construction has resulted in a report citing probable causes.

In what amounts to an indictment of the French process for executing complex public projects, the technical investigation, led by independent engineer Jean Berthier, identified two likely reasons, both procedural and structural, for the partial roof collapse at the 2100-foot- (650-meter-) long concourse.

Pierre Graff, the president of Aéroports de Paris (ADP), the authority that operates the facility, confirmed that several solutions for repair have been studied but that none of them offered a complete guarantee for the security of personnel and passengers. So, the entire vault of Terminal 2E will be pulled down and rebuilt. ADP expects reconstruction to be complete by 2007. 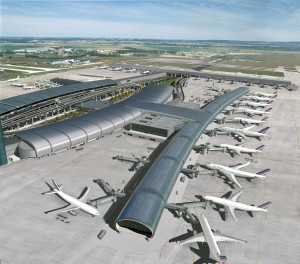 The airport’s Terminal 2E consists of a main passenger building, the fated concourse parallel to it, and an « isthmus » connecting the two buildings. A concrete and glass form rises from the second floor of the concourse and bulges out from its base, forming a flat arch. To allow movement from thermal and other forces, the roof is not fixed rigidly to its supports.

The roof’s length is made of 10 sections separated by glazed strips, and each section is further divided into 13-foot (4-meter) bays. The vault supports for each bay are 12-inch- (30-centimeter-) thick precast, perforated, reinforced concrete elements.

The French construction company GTM erected the ring sections on mobile, temporary bracing then tied them together structurally. At their bases, the arches tie into beams seated on sliding bearings running along two rows of columns, built by Hervé S.A.

Where three elevated walkways enter the concourse, at the 66-foot- (20-meter-) long collapse area, the lower portions of three sections of shell were omitted for the footbridge access. Steel connections transferred loads from the shortened shells to the full-length ones on either side. 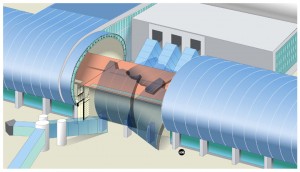 The investigation identified two possible failure modes. Several external struts punctured the shell on the north side at the footbridge openings. Detailed calculations made during the inquiry indicate that some struts would have been overstressed. On the south side, the shell’s edge beam fractured, falling off its bearings to the ground. Either of these mechanisms could have been the prime trigger.

But the report states that the concrete roof shell was inherently weak. The building was not designed to support the stress it was put under, and the concrete creep and fatigue caused by cyclical (irregular and intermittent) loading accelerated the failure. Finally, the introduction of connecting walkways into the side of the terminal created additional strain to the structure.

Berthier’s team ruled out a shearing failure of columns supporting the flat tube-shaped roof as the cause of the disaster. Subject to further analysis, the investigative commission also eliminated foundation pile settlement and the legacy of known column construction problems as likely causes.

The findings are expected to form the basis for the judicial inquiry into the incident, but the commission, appointed two days after the collapse, was not asked to apportion blame. So now, all attention is focused on the judicial inquiry, which will probably present their report in the summer of 2005. 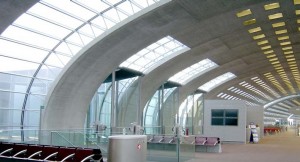 Terminal 2E, with an intended capacity of 25,000 people per day, was built between April 2000 and January 2003. It had opened in April 2003 and collapsed just 11 months later. The $900 million terminal had been expected to handle up to 10 million passengers per year by the end of 2004 as part of a plan to turn Paris into Europe’s primary air travel hub, ahead of London and Frankfurt.

The architect, Paul Andreu, an international leader in airport design, conceived the terminal as a long concrete tube with no internal supporting pillars. While visually unusual, Andreu’s design depended generally on known engineering concepts and applications.

But it seems that the complexity of the structure was underestimated during the entire design and construction process. According to investigators speaking at a press conference in February 2005, the design process was insufficiently rigorous for so complex a structure. No detailed, independent analysis was done to check the design models.

Chinks in the Process 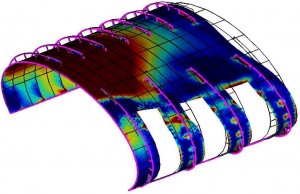 The Berthier report also questioned the French procedure for executing complex public projects. Architects and engineers from the state-owned ADP designed the building and managed construction. So there was no distinction between the client and the architect.

This process made it possible to avoid competition for the architectural design of the airport buildings and to ensure that a French airport would be designed by a French architect, to become a showpiece of French design. But the lack of separation between client and architect might have contributed to the lack of controls during design and construction.

Through his position as the head of the architecture department of ADP, Andreu was able to work, over a period of 30 years, on about 40 airports worldwide, and some of them have become landmarks. Sadly, Paris’s Terminal 2E was the last building he designed for the ADP before retiring in 2003. Andreu now runs his own architecture firm, which is constructing the national opera of Peking. 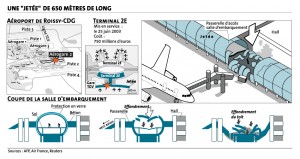 The roof collapse occurred just a month before a bill was introduced to French Parliament that aimed to change ADP’s status to a limited liability company, a condition necessary for selling shares to the public. The new terminal, with its large spaces for retail shops, should have been one of the major attractions for investors.

The ADP is officially still planning a public stock offering in late 2005 or early 2006. But because ADP is still state owned, the final decision lies in the hands of the ministries of transport and finance. So the announcement to demolish and reconstruct the entire roof might be meant to reassure future investors and regain their trust.

But the reconstruction plan might also be intended to erase the public’s memory of the accident. That might explain why the ADP and the ministry of transport have avoided handing out information about or images of the accident or the terminal in general.

A year ago, the building was the pride of the ADP. Today it seems they hardly remember that they once built it. The accident was surely a terrible moment for the ADP, but openness about the causes may be the best way to regain confidence.