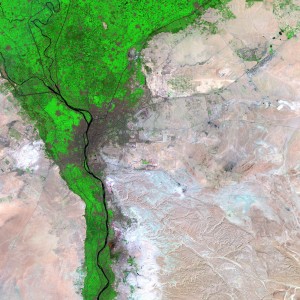 Building new cities in the desert is an important issue for the future of Egypt and other desert countries. Egypt will have an estimated population of 123 million inhabitants by 2050 [1]. As Egypt’s population currently stands at about 82 million residents, the country will need to provide housing for 40 million more inhabitants within 40 years, an incredible challenge. The metropolis of Cairo alone currently has about 20 million inhabitants, and housing developments continue to overtake the fertile land of the Nile Delta.

A new approach towards sustainable and affordable desert towns

Older communities, such as New Gourna Village, planned by the Egyptian architect Hasan Fathy and constructed between 1945 and 1948, are big sources of inspiration on a smaller scale. Today’s fast-growing towns in some Arab countries, such as Dubai and Abu Dhabi, are interesting case studies, but can hardly serve as a model taking into account their social and environmental impact. Masdar City in the United Arab Emirates, designed by the British architect Norman Foster, is an inspiring project, but built with substantial financial investments that are not available for most countries. Still, thoses examples should be analysed, as some ideas could be adapted to the local context, and today’s cutting-edge technology might become more accessible and affordable in the future.

One of Egypt’s important challenges is to develop a sustainable model of new desert towns for a population with limited financial means. Most of the country’s recently built housing is too expensive for a large part of the population, and the state will not be able to subsidize affordable housing in the quantities needed. Egypt will need research, innovation, planning and cooperation to develop a general model or framework, which can then be adapted to specific sites, local climates and future populations. Applying generic master plans, without tailoring them to the geographic, environmental, cultural, and social contexts of each respective location, can not be successful.

As these will be entirely new towns, communities just beginning their history, it give the chance to integrate from the beginning essential future issues in the new towns’ structure. For example, considering mobility: Who will be able to afford cars with combustion engines in 20 years, when petrol prices will be double or triple their current levels? Are solar-power and electric cars an alternative for desert towns and will they be affordable for a larger segment of the population? Or does the end of cheap fossil energy spell the end of the individually owned car? If car-based transportation recedes, will mixed-use neighbourhoods play an essential role in the layout of new towns and people’s daily lives? How will street landscapes and their uses change? Copying urban structures from the 20th century, heavily reliant on cheap fossil energy, might not be a good starting point.

To tackle important challenges such as this one, an innovative and flexible research centre, could quickly develop international partnerships and contextualise at a local level, to nourish the work and discussions on desert cities, like the new town of New Fayoum in Egypt. Egypt is far from alone in this need. On the contrary, Egypt could become a major centre of innovation on this front. As the world’s population continues to grow, both in rural and urban areas, other desert countries are currently facing similar questions—and through climate change, some of today’s existing towns in semiarid climate zones might become desert towns in future. One example of similar research is the Young Cities project, based on the case study of Hashtgerd new town in Iran, situated 65 kilometres west of Tehran [2].

Transparency in the decision-making process

Historically, cities were founded primarily for geographical reasons: a crossing of trade routes, a river or port, a territory with fertile land or a strategic area for defence, for example. Well-situated cities on the lucky side of history had significant advantages. Some modern cities have had centuries to develop at a much slower pace than Egypt’s new towns will experience.

Seeing a city like New Fayoum for the first time raised a question: Why build a city here? Why should people move to a desert town and what will life be like in there in ten, twenty years’ time? There are surely reasons to build at a specific site, but these motives do not seem to be linked to economy, agriculture or defence. Instead, the reasons seem to hinge on political, administrative, or financial influences [3]. But those “hidden” reasons often do not assure the good development of the town, in the readily apparent way that geographical advantages do. It seems the local population does not trust the intentions behind these decisions, and they express this by ignoring the partly constructed new towns and by not settling down in them.

The process of decision-making must change in order to address the missing answers. Establishing transparency in decisions, debates, and understandable arguments is necessary to convince and attract future inhabitants and to get valuable feedback from the population about the strategy of the project. State authorities may also need to make strong gestures of support, investing in the promising future of these towns. Egypt can draw conclusions from its own experience, as its history of new town development started in 1977, over forty year ago, with the Tenth of Ramadan City. Projects in this first generation of new towns didn’t often succeed and some of them are still in development, signs that there is space for improvements.

Egypt for instance, is a highly centralized country. In 1996, 43% of the country’s public employees, 40% of its private employees and 40% of its industrial employees all lived in Cairo. Also, half of Egypt’s universities were concentrated in the capital city[4]. So what employment opportunities or education facilities will be offert in the new towns? Creating or relocating important public facilities from their beginnings would be a strong gesture that the state supports the success of these towns, together with the development of an efficient public transport system between those new centralities, leading slowly to decentralisation of Egypt and a more balanced development of the country. The project of New Fayoum and other third-generation new towns can and should play a leading role in a new way of working, with an emphasis on constructive discussion and transparent decisions—a necessary step to bring New Fayoum and other new towns to life.

Starting with a community

Living towns are not simply built on concrete foundations but on the human need for interaction. The actual master plans of some new towns with their separated zones (residential, service, tourism, and so on), do not illustrate the complexity of human interaction. People move to towns to find new and better opportunities to work, and to share their lives with others. They hope that in a busy community, where many people are living and working together, they will find a service to offer, a product to sell, and a customer base. They hope to integrate or build up a local community for support, shared experiences, and guidance.

Such opportunities exist in a mixed town, where people work close to their living spaces, where shops are situated in ground floors of office buildings, and where small factories are inside dense urban fabrics, with all the conflicts that arise out of this proximity. It cannot be achieved through large-scale zoning and mono-functional areas. An essential ambition to follow should be the development of at least one local job for every family moving to the new town.

The construction process should not advance in consecutive layers (roads, green spaces, housing, industry, and so on), but instead start with a well-planned core, where the main elements of a new town are built and begin service. A central square with transport facilities, a town hall, a market, a restaurant, a place of worship—these ingredients establish a local community that people can identify with and trust. Residents often bond with a stable, reliable home community rather than variable local authorities with few means and often depending on central administrations in their decisions.

Even if there is an urgent need of homes for their growing populations, housing should no longer be thought of purely as shelter. In the development of liveable towns, housing is a strong instrument in delivering resilient and sustainable urban communities. Instead of being polarized and often mono-functional, any future housing strategy will need to offer complete and graduated housing plans on different planning scales, ranging from individual neighbourhoods to the entire town. Housing presents one of the major cornerstones of urban development strategies.

In New Fayoum, while the construction of technical infrastructure and streets is far advanced, and unoccupied housing space for about 18,000 people has been built in one residential zone, other spaces for offices, shops, and leisure and health facilities are still under construction or not in service. A starting point could be a mobile grocery shop [5]: selling fresh bread, vegetables, fruits and other groceries from a truck on a regular daily schedule, parked at a central spot. Other services could include a school bus, a mobile health service, a mobile movie theatre, and public concerts. A similarly helpful step would be a regular, reliable, and inexpensive public bus service linking New Fayoum to Old Fayoum and other interesting regional attractions such as Lake Karoum. Soccer teams could be created in the new urban communities, with organised competitions. The first families to settle would be supported by a reliable service infrastructure. They’d have opportunities for social interaction; these mobile facilities would also create a first round of jobs.

Until now, the process of developing entirely new towns in Egypt seems to be a successive and sequenced intervention of the different stakeholders, with limited interactions and an unbalanced relationship between them. The opinions of project developers, construction companies, institutions and influential individuals were favoured in this process, while the voices of the local population went unheard. Taking into account the new social and political landscape, the development of new towns should be transformed into a process of continuous collaboration and interaction, building a balanced relationship between the main stakeholders during the whole development process. Public authorities have to guarantee the inclusion of the public interest from the beginning of the process, while other stakeholders are successively integrated in the project. Establishing and maintaining this balance is a complicated but necessary task for sustainable development and needs independent and skilful institutions.

The post is an extract of an article published in „New Medinas: Towards Sustainable New Towns?”, Peter Lang – International Academic Publishers, 2013

[2] “The project’s overall ambition is to develop, implement, and evaluate strategies, technologies, and methodologies for sustainable, energy-efficient, and resilient urban settlements in arid and semiarid regions, especially the Tehran-Karaj region.“

[3] Officially New Fayoum was established by presidential decree in 2000 to accommodate a population of 120,000 inhabitants.

[5] In Germany, the company Heiko offers mobile grocery shops to about 1,600 villages in the rural regions of Cologne and Trier.