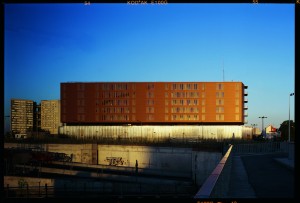 There’s a newcomer to an otherwise typical Parisian suburban landscape of highways, railway lines, factories, and housing. In the fast-growing town of Nanterre, a fire station has become a new landmark, with a copper-colored facade that changes with the daylight.

Designed by the French architects Jean-Marc Ibos and Myrto Vitart, the fire station is also a redefinition of the building type, mixing conventional fire-fighting program elements with multifamily housing.

Ibos and Vitart became founding members of Jean Nouvel & Associates in 1985 and took part in some of that firm’s most radical projects. Empowered by the experience of combining design and construction, the two joined forces to create their own firm in 1989. Since then, they have won several competitions and completed successful projects throughout France.

The program for the 124,000-square-foot (11,500-square-meter) fire station called for space for trucks, maintenance workshops, cafeteria, relaxation area, gymnasium, shared and single rooms, offices, — and 30 apartments for firefighters’ families. Despite the complexity of the mix of functions, the building layout still follows the regulations governing the design of such vital emergency centers.

To prevent delays in responding to fire alarms, the spatial organization requires that firefighters never be more than 45 seconds from the engine room. The architects wanted to organize the program for spatial efficiency and clarity. This functionalism is the predominant characteristic of the fire station and its essential solidity.

Layer One for Work 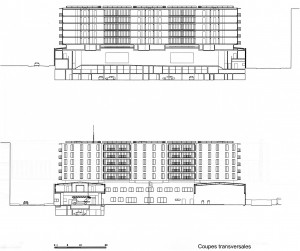 Section of the fire station © all rights reserved

A two-story horizontal element forms the base of the complex. It contains the heart of the rescue center, with the fire station and the maintenance spaces organized in a U-shape around a central courtyard. Workshops and garages open directly onto the courtyard, which has a black exercise tower at its center.

The main entrance of the fire station is at the corner of Avenue de la République and Avenue de l’Industrie, directly connecting with the control station office. The fire truck exit is located on the west elevation, the entrance on the east.

The dormitories for firemen without families are located on the level just above the fire truck garage. Dining rooms, leisure spaces, and offices located in the central aisle between west and east wings enjoy the benefit of a clear view to the courtyard and a good orientation to the sun. The fire station and its workshops share common access through the courtyard.

These utilitarian spaces are enclosed in a uniform skin with a deliberately simple massing in the form of rectangular boxes with sloping roofs. The composition of openings in the facade is dictated by function, not aesthetics.

Materials were chosen for their robustness, durability, and ease of maintenance. The lower part of the building is clad in mirrored stainless steel panels with a seemingly random rhythm of openings. Visible from the balconies of neighboring buildings, the roof of this lower part is designed as a « fifth facade. » 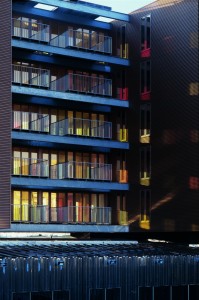 The architects were faced with the problem of designing the multifamily apartments for a quality of life that seems at odds with the rigor of a fireman’s activities. So they created a second volume above and visually separated from the base. This autonomous volume overhangs the fire station and frames an urban front along the Avenue de la République.

The entrance to the apartments is along this avenue. The lobby stretches the entire length of the site; from here, elevators and staircases lead to the parking lots below and apartments above. The apartments for the higher-ranking firefighters and their families are gathered in three blocks linked by glazed bridges.

Vertical connections and kitchens are located along the noisy avenue side. The glazed bridges house the living spaces that open onto exterior terraces. Bedrooms are located on the east and west sides of the blocks. The apartments benefit from multiple views and orientations, so that no apartment opens solely onto the noise of the avenue or to the working courtyard.

The apartment block is clad with copper-toned aluminum panels, and the aluminum windows — both operable and fixed-frame types — are of the same color. Gold glass merges with yellow, orange, and red glass in the windows as an abstract evocation of the spirit of fire. The clear separation between the two distinct volumes is strengthened through the choice of cladding materials. 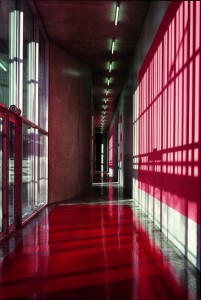 Hallway in front of the apartments © Georges Fessy

The architects have created a remarkable building based on the notion of efficiency and with a strong conceptual approach. References to the urban environment appear throughout the building. Steel, concrete, and asphalt are mixed with markings in red and yellow and rows of neon lights. It is a harsh environment, without compromise, that the architects created in this suburban landscape, trying to represent the daily work of the fireman.

But do the firemen really want a fire station where they are constantly reminded of the harshness of their work lives by rough surfaces of steel, concrete, and asphalt? The few I met did not seem to value the conceptual approach as much the architects.

Maybe they would prefer a smoother, softer interior for their cafeteria, relaxation area, and shared and single rooms, somewhere they could relax in a cozy atmosphere and momentarily forget their work. But maybe they just do not understand contemporary architecture.

Published in « Architecture Week » on the 16th February 2005