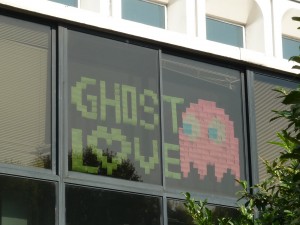 A handful of colored papers, a dose of creativity and that’s it. Mario, Space Invaders, Simpsons, Pac-Man … dozens of characters from video games and cartoons of the 90s, represented through post-it, decorate since a few weeks the glass facades of the office buildings space in the Paris region.
The phenomenon has affected the business district of La Défense early May (see the album of the business district), before reaching Montreuil, relayed on video game forums. Discussions on the site Gamoover.net trace the genesis of this « post-it competition » between the employees of several nearby businesses.
These employees with an impulse of artistic expressions then published pictures of their works on Twitter and Flickr, creating a regional rivalry. The post-it virus has since spread to Paris, Issy-les-Moulineaux, where images are grouped on Twitter via the Keyword #IssyPostIt – and even Lyon.
Is it a short trend passing by, a wish of introducing some color in the daily routine of a dull summer and to personalize exchangeable office floors? A hidden artistic potential, underestimated by the companies who are unaware of the creative power of their staff.
Or the expression that something is going wrong in the design of office buildings and business districts, dominated by glass walls; polished marble entry’s and sound absorbing carpets, ignoring the human need for being individuals and to influence their daily environment.