The following text is an extract from the research “The Tri-Bike-City, improving sustainable mobility”, which had been conducted within the Mentor&Student Research Lab, a common initiative of the student research club ‘LEM-ur’ of the Gdansk University of Technology and ISOCARP. The aim is to promote collaboration of professionals and students in research on the Tricity and the Pomorskie region.

Gdansk, capital of the Tricity

Gdansk is a Polish city on the Baltic coast, the capital of the Pomorskie Region, Poland’s principal seaport and the centre of its fourth-largest metropolitan area. The port of Gdansk and the nearby port of Gdynia are also an important industrial centre. The city is the birthplace of the Solidarity movement, which under the leadership of Lech Walesa played a major role in bringing an end to the communist regimes across Central Europe. The area of Gdansk is 291.96 km² and the density is 1758 people per km² (2013).

Since several years the city of Gdansk is developing a new transport strategy with a shift from building more roads and car parks towards the support of active mobility (walking, cycling), public transport and improved mobility management. The city sets its strategy in line with strategic documents of the European Union.

In this context the city of Gdansk is participating in several mobility projects and programs and the city council started to recognize the needs of cyclists and the significance of active mobility and public transport. The number of cyclists in Gdansk is constantly increasing, e.g. by 12% in 2013. In the main streets of the city the daily cycling movements counts in thousands. 6 500 cyclists on Zwyciestwa street and over 10 000 on the coastal bicycle lanes are daily records.

The network of cycle routes in Gdansk becomes denser and the number of bicycle parking areas is increasing. The city authorises contra flow movements for bicycles in 127 streets, in total on 24 km. It is a convenient and secure solution that ensures the connection of the bicycle lane network. Gdansk follows the solutions used in Belgium, where for all roads wider than 3 m the authorisation of contra flow cycling is mandatory. All one-way streets with the possibility of contra flow cycling are marked on the cycling map of Gdansk.

In July 2014 the city edited an updated, more accurate edition of this cycling map of Gdansk. One of the improvements is the proposal of several ‘recreational loops’, like the route between the storage reservoirs in Gdansk’s South and the Oliwa Forests or the Sobieszewska Island. The map is printed in 16 000 copies, available free of charge, and on the internet. The cycling map of Gdansk is part of the project ‘abc.multimodal’ and co-financed by the European Union from the European Regional Development Fund in the framework of the South Baltic Programme.

In the ‘abc.multimodal’ project five partners from the South Baltic Region cooperate until 2014 to integrate cycling into their multimodal transport system and the mobility culture. Pilot actions of the city of Gdansk will be disseminated in the whole Tricity region and beyond, demonstrating the development opportunities for cities to become more attractive for residents, visitors and investors. The City of Gdansk takes the leadership for one component of the program: Awareness raising and capacity building – integrating cycling into mobility culture. Activities in this component are:

The promoting of cycling and walking as an alternative to daily car trips is one of the goals of the European Switch Programme. The project aims to promote the population’s lifestyle changes for a healthier way of living and improving the environment by reducing the air pollution emissions. The most important task of the city of Gdansk is to promote walking and cycling by using modern technology (e.g. applications for Smartphone) for a group of at least two thousand people. The budget of the entire project is 1 690 072 €. The City of Gdansk will allocate 109 348 € for its implementation.

Gdansk has a chance to become a leader of Polish and East-European cities when it comes to sustainable transport and mobility management. It boasts a high use of public transport (40% of modal split) and for the past several years has been recognized as a cycling capital of Poland. With its Mobile Strategic Programme, the city wants to achieve the following goals:

–   Gdansk as leader of new mobility culture in Poland, a model city in terms of sustainable transport.

–   High quality and available to all public space.

–   Life quality of the highest level among large Polish cities.

–   High share of active forms of transport in every day trips.

–   Low use of private car use in every day trips about the city.

With the financial support by the European Union Gdansk is investing in the quality of its public transport. The city is currently upgrading the tram system with a new line to the district of Chełm and one to the district of Morena, which is being built. Older lines are modernized and new trams are being bought.

The ZTM, the City Transportation Office of Gdansk, conducts two programs to make their public transport offer more attractive and to assist handicapped people in the city. The „Duża Gdańska Rodzina” programme (what can be translated to „Big Gdansk Family”) allows families with at least 3 children get a mobility card allowing them to travel with no cost. ZTM also provides special microbuses for handicapped people, who often face difficulties when using the general ZTM public transport system. Some of the vehicles are not adapted yet for the use by handicapped people and some of the stops and stations don’t have appropriate elevators or accesses.

The Pomorska Kolej Metropolitalna is a public limited company, established by the Pomorskie regional government to build the railway line Gdansk Wrzeszcz, from Gdansk Airport to Gdansk Osowa / Lech Walesa. It is to be used both in the urban area traffic, as well as on regional level and it will allow people from the outskirts of Gdansk to get faster to the city centre by public transport. It is the biggest railway investment in the northern Poland and planned to be finished by July 2015. Being a modern investment, new bicycle parking and accesses are being built with the new stations.

In the whole TriCity and especially in the city of Gdansk there are numerous campaigns for active mobility organised by city council as well as by local initiatives.

It is a campaign in which 25 schools from Gdansk are competing with each other. Its goal is to promote active mobility among children. The percentage of children riding to school by bicycle is counted during 11 days. For the best result the children are rewarded and self service bicycle repair station is given to the winning school.

Shop by bike (Rowerem do sklepu)

Shop owners are encouraged to build bicycle parking in front of their shops, which are complementing the bicycle network in Gdansk. According to previous research it proves to increase sales. The most important matter is that the bicycle parking is functional otherwise customers on bicycles will not stop. A letter signed by the mayor had been sent to over 200 company owners.

Several workshops are organised in Gdynia on Kościuszki square, during which cyclists can learn how to take care of their bicycles.

See you on the road (Widzimy sie na drodze)

The campaign organised by the Trójmiasto.pl website portal promotes riding a bicycle by giving away lights set for everyone interested. Five hundred people got their sets.

Bike to work (Rowerem do pracy)

Annual event involving employees of local companies going to work by bicycle and their attendance is counted. The winners are awarded with light set for their bicycles. This is a great opportunity for companies showing their engagement and has a positive feedback.

In a publication in the Official Journal of the Pomorskie regional government of the 26th June 2014 concerning the development plan for the city appeared for the first time indications about the number of parking spaces for bicycles near the residential and service buildings. 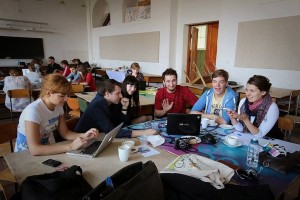 In addition to these different initiatives, the city council of Gdansk organised a competition for the best bicycle themed photo which is awarded with a bicycle. In schools and tourist information stands bicycle maps of Gdansk are handed out. Furthermore to encourage safe bicycle parking some u-locks had been given away for cyclists. There are bicycle themed conferences, meetings and a bicycle festival in Gdansk. These events are highly attended by bicycle enthusiasts and encourage many to change their habits.

Mentor: Christian Horn is the head of the architecture and urban planning office rethink