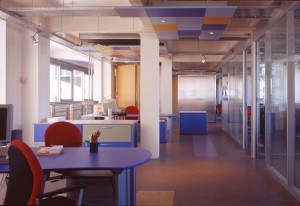 Workplaces on platform A © Gitty Darugar

In July 2000, the architecture team Edge won the design competition for the new 2500 m2 Pixelpark Office in Paris. Just six months later, the company moved into its new headquarters. Edge, a two-man office made up of François Gillet and Andrés Atela, was established in 1997; it specializes in designs for offices spaces, temporary exhibitions, and showrooms. Both independent architects and teachers, Gillet and Atela live and work in Paris.

For Edge, corporate identity is not only the company’s work but also in the coherent design of its workspace. Pixelpark, a German multimedia company, wanted its Paris headquarters to be a visual interpretation of the company’s philosophy and the company was ready to invest in its team of about 160 employees, some of whom spend often 12 hours a day at their office. When Pixelpark decided to expand, they sought to create a convenient, thematically oriented space that could translate their activity into expressive design and a stimulating workspace. 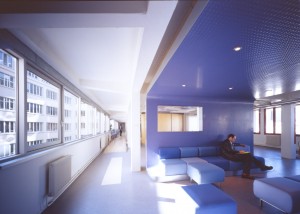 The architects brought an innovative approach in the design of the common spaces and the organization of the circulation throughout the space. When entering the office, the distinction between the working areas and the common spaces appears simple and clear. With their first large-scale office project, the architects succeeded on both the functional and aesthetic fronts.

Pixelpark occupies five platforms on three floors of a 1960s industrial building built around two courtyards. The neighborhood, in the northeast of Paris near the Canal St-Martin, buzzes with new technology and Internet start-ups. The architects began by establishing a neutral space, emptying the platforms and preparing the technical installations. From this base they started the interior architecture as a set of components. They conceived an infrastructure of strong, playful elements, footbridges, conference rooms and discussion areas that they distributed on the different platforms, structuring the space.

The five platforms are divided and organized into distinct work zones that are mostly shaped as open-space areas. The concept is to access the offices by slightly elevated footbridges, akin to gangways on ships. These footbridges act as arteries, crossing the platforms to connect the various work areas without encumbering them. 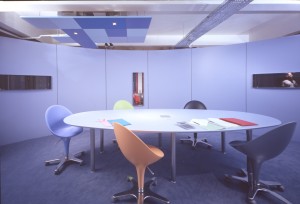 Inside a conference room © Gitty Darugar

Oval shaped meeting rooms, designed as closed spaces with windows to the exterior, open directly onto the footbridges, as do small common areas with copiers and fax machines. Both are covered by clear wooden panels on the outside and strongly colored in yellow, lime green and slate blue on the inside. The discussion area is designed out of rectangular glass tables and small, quirky stools on wheels turning around the tables combining the practical and the fun.

At the fourth-floor main entrance, the reception and the primary waiting area flow into a larger reception room, which doubles as an presentation, exhibition, and event space. Located on the street side of the building, it gives an impeccable view of the Canal St-Martin. This platform level also includes two seminar rooms for eight to ten people and the administration area as an open space office. The seminar rooms are enclosed by partition walls and are fitted with a glazed façade to benefit from the natural light. Suspended, transparent partitions separate the islet of the dozen administration workstations that are divided into groups of four.

The IT department forms the core of the middle platform, where islets of eight to 12 workstations accommodate 70 people. A central footbridge fluidly connects the whole platform, edged on both sides by a handrail that integrates storage furniture. Two spaces for technical installations are grouped on one end of the platform. 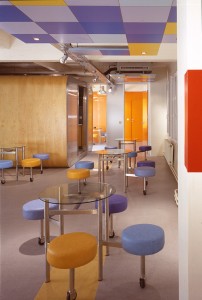 From the zone of entry, another footbridge circulates through the creative division on the eastern platform. This spacious level opens like a large landscape for 30 to 35 people and includes a conference room and discussion area. One large, wood paneled wall combines storage, display space, and library materials. On the second and third floor, two further platforms continue the open-space design, with a consultant’s area for 12 to 15 people and a marketing area for 30 to 35 people.

The primary waiting area, the cafeteria and the kitchen are integrated in three dimensional bend elements. The same element contains the lightning, turns into a wall and forms the floor and the benches. Made out of a wooden structure they are covered by an industrial linoleum floor, equally colored in yellow and blue and closed on the edges by an stainless steel plate, creating distinctive spaces within the office.

Throughout the office, shaded gray floor linoleum indicates the different areas, while strips of strongly colored linoleum create a rhythmic spark. Since the existing concrete structure only offers a height of 2,20m to 2,40m, all technical networks, electricity, computer, and air-conditioning, are exposed and guided in canals of galvanized steel under the platforms’ ceilings. With these cable canals, plug-in terminals are suspended until 1,20m above the floor and allow all necessary network connections for the workstations. Often hidden in the floor or the walls, the network connections become here a visible element of the office space. 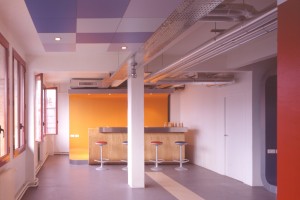 View on the bar © Gitty Darugar

As with the plug-in terminals, the air-conditioning and lighting equipment are suspended from the ceiling and hidden in the so-called clouds. These are composed of colored, angular elements distributed over the platforms’ ceiling. They are symbolizing digital clouds, an image for the activity of the multimedia company.

The detachment of the interior design from the main structure of the building set the architects free to devise adaptable, flexible components. This tactic also worked in their schedule’s favor, as they had only four months to complete this project. Gillet and Atela created a space both dynamic and playful, without being seduced by the design of non functional gadgets.

Section through the IT pole on the middle platform © Edge

The successful design for Pixelpark extends the growing trend for unconventional layouts in Parisian office space. In the past four years, fast-developing multimedia start-ups increasingly want to reflect their nontraditional business approach in their office environments. Hard work is now often presented with an edge of fun and luxury. Although many companies in the new technology business sector may be short-lived, their impact on the development of French office design will surely have a lasting influence.