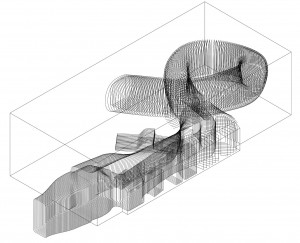 Francois Roche’s concept for converting a warehouse into a private art gallery was realized in a rear courtyard in Paris. Access is through the storage area, which has been retained in its original rough condition and leads directly to the « White Cube » exhibition area. The white color and diffuse lighting of the Eudidean walls blur shapes and make distances difﬁcult to estimate. Under the gallery, there is a living area, which bulges outwards and infiltrates the exhibition area with its topological geometry.

The project for a private art gallery began in December, 2000, when a « South American art collector », who wanted to remain anonymous, contacted R&Sie…, the Parisian architects. He invited three architect’s offices to take part in an unofficial competition for the conversion of a warehouse building into a private art gallery. It was not possible to inspect the location, and the competition documents, consisting of photos and plans, were sent to the architects anonymously. The participants were told to place their submitted designs in a post office in Paris a month later for general delivery.

The absolute anonymity of the customer and confidentiality of the gallery’s exact address informed the whole project. The architects therefore gave the unknown client the pseudonym « De la Vega » after a character in the novel « Zorro ». De la Vega was not interested in making his gallery accessible to the public and avoided becoming known as a collector of art. The gallery was intended to enable him to make the works accessible to a small circle of invited people in private exhibitions. It was exactly through this circle of art lovers that his attention had been drawn to the work of François Roche and Stephanie Lavaux, the partners of R&Sie….

With their design, the two architects won the competition and the client engaged R&Sie… in March 2001 to elaborate and implement their design. The program was simple and included a storage room for the art collection, an exhibition space and a living area for short visits. A building permit for the project was issued in November 2001. The work began six months later and the gallery was finally handed over in March 2003. Contact with De la Vega remained restricted for the whole period and, because he did not stipulate any functional or design-related conditions, they were able to develop a highly unusual scenario. Francois Roche profited from this rare degree of freedom and integrated the most varied of associations in his design.

De la Vega had purchased a former warehouse in the 10th arrondissement of Paris. It is located in a rear courtyard and, after conversion, blocks off all views from the outside. Inspired by the bars and gambling casinos of the 1930’s in Chicago, Francois Roche made access to the gallery possible only through the storage room for the art collection and juxtaposes the unrenovated storage space full of crates, with the gallery and living area.

As a reference to the « White Cube », which, since the nineteen ﬁfties, has been enabling galleries and museums to isolate works of art from their geographical locations and to exhibit or trade in them, Francois Roche covered the whole gallery and the living area in white. The absence of color generates an atmosphere in which the works of art and the occupants become actors and, as in the film « Pleasant ville » by Gary Ross, change and lend color to the environment by their presence. Without any compromises, it forces the occupants to come to terms with these traces of life, to accept them or to combat them by continuous cleaning and painting. 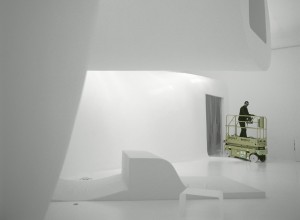 Due to the sculptural shape, taking up the kitchen, sanitary sections and sleeping areas, the architects magnified the space of the exhibition area and the private area. It links the two zones spatially but without creating any direct visual connections. From inside the living area, it is possible to sense and hear the presence of the gallery without losing the private intimacy. The cost of converting the gallery was around 760,000 euros, whereby the renovation work alone accounted for approximately 3/4 of the construction costs. Whereas the latter work was given to a normal construction company, Christian Hubert Deliste, mainly a creator of art installations, carried out the design of the spatially winding interior.

This is based on a steel construction designed by engineer Nicolas Green. Hand-cut wooden panels forming the skeleton are vertically arranged on this construction at distances of 20 to 50 centimeters. A plastic material used in horticulture covers the panels, to which plaster and synthetic resin were applied. The ceiling of the gallery consists of a tensioned film, which diffusely filters natural and artificial light. In the space between the film and the glass cover of the roof, the technical equipment for lighting, heat and sound is installed, whereas a ﬂoor-heating system ensures a constant basic temperature of approximately 15° C.

With this project, François Roche continued his work in the area of experimental architecture. He created one of the most unusual galleries in Paris, which, unfortunately, will only be accessible to a small circle of people. The quality of the architecture lies in the relationship between space, the user, the art and the traces of its use, between the limits of different functions and the perception of space.