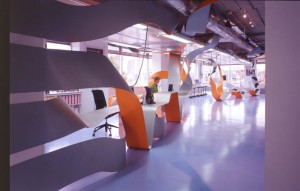 Office Claydon Heeley Jones Mason – Ushida Findlay specialize in surrealistic interiors. Their latest work, for Claydon Heeley Jones Mason, is an office which differs markedly from the typical office space. The advertising agency wanted their London headquarters to leave an impression with their clients and opted for a pop-art style. The rubber seating in the reception area was developed by the well-known firm Inflate. The seating has orange and lime scents. The work tables are reminiscent of lilies floating on blue water. Agency employees drink their coffee sitting on green sofas. British business style is evolving.

Office De Shaw – The offices of De Shaw prove that brokers in the west are ready to experiment with design. In fact, is there any reason why a firm engaged in structural analysis of financial markets should not locate itself at the top of a Manhattan skyscraper? The company’s founder – a physicist by education – is proud that his office has been designed as an experimental project in the reﬂection of light. The interior walls are made of a metal framework trimmed with stone and covered with white plaster. All around the perimeter special window/niches of identical construction have been cut out to light the interior. The light beams are refracted at parallel angles and, together with sunlight and light from lamps, form a lighting show. The sterile and surrealistic interior contains more than 200 computers that are constantly analyzing the situation on the world’s major stock-exchanges. Seen from the street at dusk it resembles an green cube perched on the tip of a skyscraper. 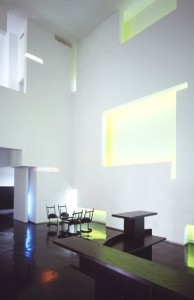 Introduction – Ten years — a period in which office design was strongly affected by the Internet — separates the designs for the offices of De Shaw & Co and Claydon Heeley Jones Mason. Ten years is a long time in the development of office design. This is what makes it so interesting to examine the different ways in which the architects here tried to reflect the companies’ activities in their designs.

The companies – These companies have very different fields of activity and styles and methods of working. De Shaw is a financial corporation set up by a physicist in 1988. Its work revolves around prices on the world’s leading stock-markets, i.e. rapidly changing flows of information. The firm’s computers are linked by satellite with world financial markets and operate continuously (with only a small interval when the Tokyo stock-exchange closes and London is not yet open). In I992 De Shaw moved to the two upper floors of a skyscraper in the centre of New York and made contact with the New York architect Steven Holl, who was by that time already quite famous. The London marketing communications agency Claydon Heeley Jones Mason, on the other hand, has become a kind of pioneer when it comes to rethinking the very function of office space. Its building is in Battersea, London, overlooking the River Thames, and was built in the 1980s. In a tough economic situation, as profits were falling, the company’s management decided to use the working environment as a means of improving its staff’s productivity, opting for an energetic interior that would stimulate creativity and thus push up profitability. In 2001 Kathryn Findlay developed a new concept of office space. 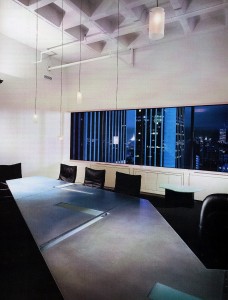 The architects – Kathryn Findlay has an emotional, intuitive approach to design and architecture. Together with her ex-husband, Eisaku Ushida, she made her name in the 90s in Japan, creating organic and surrealistic interiors such as, for instance, Soft and Hairy House. Recently, Findlay and Ushida moved part of their studio to London, with the aim of designing offices in the same style, only in Britain. The work of Steven Holl has developed according to a very clear conceptual scheme: each new building he has designed has been, artistically, the continuation of the previous one.

De Shaw – According to Steven Holl, De Shaw operates not in the ordinary physical space that is New York, but in ‘the ultramodern space of information flows’. It does not matter where the office is actually located, since it is connected to the global trade network. De Shaw’s business depends on information – an ephemeral concept which needed expression through design. Holl came up with a simple system of plaster structures placed on metal frames. All the structures are lit in a special way. The visible surfaces were painted white; and the invisible ones, brilliant colours which reflect sunlight during the day and lamplight during the evening, creating the impression of metaphysical illumination without a visible light source. The play of planes and reflected light are a kind of material analogue of information ﬂow. Thus the office as a whole has the appearance of cyberspace. 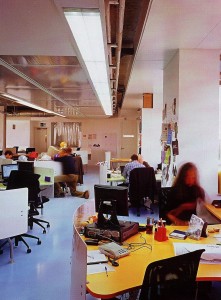 Claydon Heeley Jones Mason – In her office for Claydon Heeley Jones Mason Kathryn Findlay created a space that is variable and organic. She rejected the kind of hierarchical structures that are to be found in standard office buildings and broke down the traditional boundaries separating work from play. The office must leave an indelible impression on the mind of the client. Findlay has here evidently taken a different path from Holl in her approach to reflecting her client’s activities. The furniture is not simply a collection of functional objects, but part of the overall game played with space. In the reception area silver and orange steel bands form curves on which are dotted chairs and benches, information boards, and video screens. The orange rubber seats, designed by Inflate, the British design studio, can be attached to the band at any point. For the open work areas Kathryn Findlay has chosen three colours – orange, green, and blue. This, it has to be admitted, is a highly unusual range of colours for an office. Orange is the colour used in the company’s logotype, while green and blue are symbols of the River Thames, which flows nearby. The office of the Board of Directors on the top floor is worth looking at in some detail. It is separated from the rest of the office by a sliding glass door engraved with an ocean wave.

In conclusion – Both designs succeed in reflecting the activities of the companies for whom the offices are intended. Steven Holl sought a visual image of a space penetrated by information ﬂows, while Kathryn Findlay played on the creativity of the marketing agency for whom she was designing. However, Steven Holl’s interpretation of De Shaw’s office is truly radical. His design is essentially a piece of experimental research into ways of transforming space through the use of natural and artificial light. Kathryn Findlay, on the other hand, in her work for Claydon Heeley Jones Mason has concentrated on avant-garde accessories, furniture, and decorative effects.