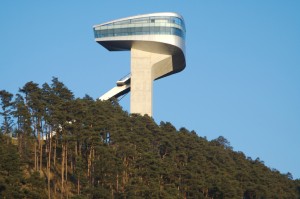 Cobra, high-heeled shoe, golf club… Quite a few nicknames have emerged for the new Bergisel Ski Jump since its opening in September 2002. Time will tell if one of these nicknames will stick, but already the ski jump by the London firm Zaha Hadid Architects has become an important point of reference for the surrounding mountain landscape.

The project is unusual because it is more than a ski jump. It is a hybrid of a highly specialized sports facility and a collection of public spaces including a cafe and a public viewing terrace. Normally, a ski jump is a relatively one-dimensional technical building, laid out for a single purpose. But in Innsbruck, the architects wanted to find a new form to express the mixed use.

Innsbruck has a long tradition as a venue for winter sport competitions, especially for Olympic ski jumping. Bergisel Mountain, overlooking the town, was the venue of the great ski jumping competitions during the Winter Olympics of 1964 and 1976.

But by the 1990s, Innsbruck was facing a problem. Its 1960s-built facility no longer conformed to international regulations. Modern athletes were jumping much farther than they did in the 60s, so the site had to be redesigned if Innsbruck were to remain a top international venue.

The event organizers finally decided to start a major refurbishment of the Olympic Arena. The old ski jump, built by the engineer Horst Passer, had to give way to new construction. In December 1999, the firm of Zaha Hadid won the international competition of the Bergisel Betriebsgesellschaft.

Sweeping Down the Mountain

The new Bergisel Ski Jump is a sweeping, geometric run that fits in perfectly against the background of the towering Alps. It is like a cross between a tower and a bridge — 295 feet (90 meters) long and almost 165 feet (50 meters) high.

The slim tower design incorporates the cafe and viewing terrace at the top. Two lifts take visitors up to the cafe, 130 feet (40 meters) above the peak of Bergisel. There, spectators enjoy views over a beautiful alpine panorama, and from this privileged viewpoint they can observe the athletes flying across the Innsbruck skyline.

Hadid’s competition entry stood out from the others because of its silhouette. The design suggests an almost animalistic presence, and it has the power to become a local landmark. Project manager Jan Hübener said in an interview: « Originally, there was an abstract design idea that developed relatively independently from the competition regulations. It turned out during the design process that there was no problem to install the whole program into this abstract idea, as it was flexible enough. »

The structure and shape of the project was developed in collaboration with structural engineer Christian Aste. To coordinate the construction process, the architects needed to set up precise logistics on the building site, taking into consideration the difficult topographical conditions of the mountain and the high technical demands of the building, all coming together within a short construction schedule.

Flight Tied to the Earth

Design was complicated by the coexistence of three different kinds of construction: underground, surface, and aerial. Structurally the ski jump consists of a vertical concrete tower, a green-metal bridge integrating the ramp and the cafe, and the foundation dug into the Bergisel Mountain.

But conceptually, the structural elements are not different systems, just parts of the total construction. It was important for the project to create a uniform architecture, a fluid building. To support this image of fluidity, the building was covered with metal sheets marked with fine vertical grooves that follow the curves and reflect light differently depending on time of day.

At night, lights trace the cafe and the track of the ramp. The inside of the ramp, which has a U-shaped cross section, and the inside of the cafe are lit by strips of light that change color. Lighting the interior makes the tower’s appearance at night quite different from that of daytime.

In a sense, the ski jump represents an interactive viewpoint. On one hand, it attracts attention to itself; on the other hand, it offers a view onto the landscape and town of Innsbruck. Let’s hope that the public areas of the structure will be used not only by tourists but also by locals and that it inspires valley residents to visit their Bergisel Mountain.

For outsiders seeking an occasion to visit the building, the refurbished Bergisel Stadium will play host to the international Four Hills Ski Jumping Championships in January 2004.

Published in Architecture Week on the 28th May 2003