The elementary school from the outside © Hervé Abbadie

The northeast of Paris is a very heterogeneous area. On one hand you find the town of the 19th century mixed with various constructions of the 20th. On the other hand whole blocks have been erased, sold to real estate companies and rebuilt in a style that is making an effort to be a modern interpretation of the Parisian buildings of Haussmann, though never quite reaching the same quality.

This development occurred in 1990 on a large block in the 19th arrondissement in Paris. Several streets had been occupied by the studios of the SFP (société française de production), a French TV production company. In the 80’s the SFP began to move their production out of Paris in the suburbs and left a large, unused area.

The site was sold in 1990 to the French construction company Bouygues that ended up building nearly 700 apartments on the site. The French architect’s office Valode & Pistre, who drew the master plan, split the block to assure the accessibility of all the apartments by creating a small private street. The street was named < cours du 7ième Art > in memory of the old film studios.

Along this street a long and narrow area remained empty. Too complicated and expensive for the construction of apartments, the construction company left it to the City of Paris. The latter decided to plan an elementary school on the site for children of the ages 2 to 6 and ran a competition in 1996, which was won by the French architect Gilles Margot-Duclot.

The elementary school from the outside, view of the schoolyard © Hervé Abbadie

Situated on the corner of two streets, the future building had to link the two different urban structures that met at this point. The site is about 100 m long and between 10m and 20m large. On top of the difficult size, the main side of the area is orientated to the south. The architect therefore had to avoid the overheating of the classrooms without shutting them off from its environment.

It is not easy for an architect in Paris to construct on a small site with several different neighboring buildings. There are numerous regulations to comply with. So during the planning process of the school the urban regulations and the shape of the area determined more and more the final shape of the building.

The architect decided to construct the school at the corner of the two streets on two thirds of the site, leaving an open space of 40m for the courtyard. The main building is about 60 m long and between 10 and 20m large. The requirements for the school included nine classrooms, some sleeping rooms, two playing rooms and one lunchroom. All together they counted for 1700 m2. Since the building site was only about 1500 m2 and the school needed a courtyard of 1000 m2, the yard had to be split into several levels. 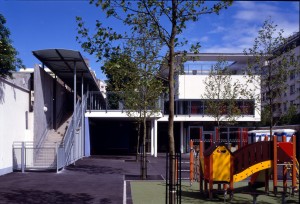 When you first approach the building, it seems to stand out of its environment because of its different size but integrates at the same time through its materials. Being only half the size of the surrounding buildings it appears small with clear horizontal lines and large windows, simple without spectacular details or eye-catching colors. The polished concrete of the facade and the zinc-covered roof however integrate the school into its environment.

The base of the building is made of burr stone. The color and structure of the stone reminds you of the dry walls you find in southern France. This idea seems to be strengthened by the floral drawing on the fence of the courtyard.

The architect himself applied the stone as a reference to Jules Ferry the founder of the republican school system. For him it represents the strong base of an education that is granted and controlled by the state. This kind of stone had been used for a long time for the bases of the public buildings but has now become quite rare.

Despite the simplicity of the southern facade, it is well planned and detailed to avoid the overheating of the classrooms. Every horizontal retreat and interruption in the facade is built to let in the natural light and to block the direct sunlight without using external shades. Those are not welcomed by the city since it is trying to lower the maintenance costs of its buildings through a simpler design. 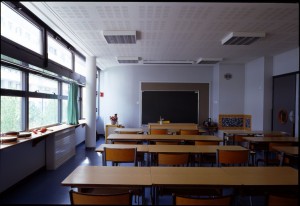 The interior concept is based on the circulation and the constructive structure. A main corridor lies in the middle of every floor and connects the different functions with the main entrance, the staircases and the outer courtyards.  The constructive system consists of a simple precast beam and column structure in steel concrete. Four lines of columns organize the building, two along the main corridor and two in a distance of 7,20m, just behind the façade, so that it stays independent from the constructive system.

The main entrance to the school is situated in the middle of the building in the private street and has an exterior, covered waiting area, since the parents are not allowed to wait inside the building. The entrance is connected to the hall, which is the central point of the building and linked to the main corridor. All circulations between the different functions of the school go through the hall. The main corridor on the ground floor leads to the two staircases and to the courtyard.

The hall spreads over the first two stories and receives indirect natural light from the roof lights of the second floor. A large wall painting done by the artist Yvan Messac, a friend of the architect, decorates the hall. It represents the Small and the Great Bear in the night sky. In front of the wall painting two stone sculptures represent the two constellations.

The actual division of the functions over the three floors follows a simple logic of accessibility. The smallest children stay on the ground floor, the older ones on the first floor and the oldest on the second floor. The apartment of the housekeeper and the technical installations for heating and ventilation are situated on the third floor.

All the interior equipment like tables, chairs, coat racks and sanitary installations have been designed and selected to assure the comfort and freedom of circulation for the children. All the classrooms are facing south and are well protected from direct sunlight by the facade. They are about from 5,6m deep and 9m large thereby trying to facilitate all possible kinds of utilization. 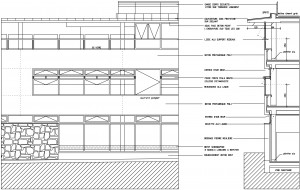 The building as a whole has two quite different sides. The one to the street appears to be simple, clear and two-dimensional while the one to the north and to the courtyard is a playful combination of volumes and terraces. Both are mainly determined by the building regulations. The facade to the street had to be without larger retreats. The northern side had to respect the neighbors right of a clear view at the sky in an angle of 45 degrees from all points of their properties. This situation caused the main corridor in the second floor to change its direction to respect a neighboring two-story courtyard shed.

The elaboration of the compact plan is the result of the surrounding influences. Planning the space where it was allowed and not were it would have been most suitable. But fortunately the difficult shape of the area and the influence of the various regulations lead to more interesting solutions, different spaces and a more remarkable elementary school than one tends to see in Paris.