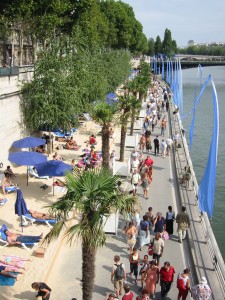 During France’s traditional August vacation period, part of the riverside roadway in Paris‘ inner city was blocked off to traffic and handed over to strollers and roller-skaters. As during last year, the « Paris Plage » project was created again, an inner-city beach on the banks of the River Seine. But the phenomenon was not restricted to Paris. Toulouse and Budapest also wanted to have their own artificial beaches down by the river. Sand, deckchairs and palrntrees invited the populations of these cities to rediscover their river banks and enjoy a beach holiday inside the city.

Sand and palmtrees for everyone

« Paris-Plage » was an idea of the mayor of Paris, Bertrand Delanoë, and symbolizes his policy of democratizing city life: beach, sand and palmtrees for anyone spending their summer in Paris. The success of the project has proven him right as, last year, over two million people took part in the first beach campaign. It is astonishing how just a few elements loaded with strong associations – sand, deckchairs and sun umbrellas – can transform a busy riverside road into an urban beach overnight.

The riverside roads in Paris cross through the city like linear strips on the north and south banks of the Seine. This year, the north bank road was blocked off and, like a string of pearls, various « animations » were arranged along the promenade over a distance of three kilometers: sunbathing beaches, picnic tables, a lending library, a floating stage, Tai Chi, beach volleyball, a climbing wall, bicycle rental facilities, sand-castle building, pétanque, as well as concerts, music and dancing. 3000 tonnes of sand, 300 deckchairs, 240 sun umbrellas, 40 hammocks, palmtrees and several water installations such as showers, springs and sprinkler.

Compared to the previous year, the aim was to intensify the action both qualitatively and quantitatively, without increasing the costs for the city. To this end, selected sponsors were brought in as partners without violating the basic principles of Paris Plage: no commercialization and no advertising – the reason being that the accessibility of the whole beach for all layers of the population is one of the fundamental ideas inherent in the city beach.

The total costs for the city of Paris amounted to 1.5 million euros, with 3 million visitors in four weeks. The sponsors contributed approximately 800,000 euros. Inspired by the success of the Paris Plage project in 2002, some other cities also decided to follow its example. The French city of Toulouse, for example, started its project « Toulouse Côté Plage » on 21 July this year on the banks of the Dordogne with a program similar to that of Paris Plage. Budapest, the capital of Hungary, followed somewhat later at the beginning of August, with a beach on the Pester bank of the Danube. But this had more of a fairground orientation. 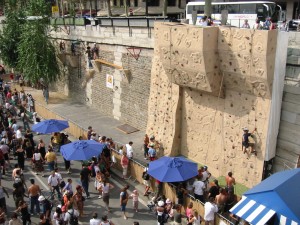 But Paris Plage is not simply a promenade or an adventure park. Campaigns that design public space with symbolic elements take place every year during the Christmas markets with their wooden huts and glühwein. Paris Plage, in contrast, apart from being a leisure time experience for visitors, relates to the meaning and use of public space and this also includes the streets and the roads.

As in many other cities, the banks of the Seine have become important, busy transit roads over the years. Due to the high-density traffic, the city and its inhabitants have been separated from their river and there are only rare possibilities of direct contact with the river inside the city.

For a long time, no-one was really interested in questioning this situation. But Bertrand Delanoë, the new mayor elected in March 2001, brought with him a new way of looking at car traffic in the city. Just after taking office, he began by setting up physically separated bus lanes and by widening pavements. During his « Paris Respire » (Paris breathe) campaign, he blocked off several streets to traffic every Sunday, including the previously untouched riverside road, and handed the roads over to pedestrians, cyclists and roller-skaters.

European cities are reacting differently to the growing amount of car traffic that is threatening to strangle them. Whereas the space for car traffic is being systematically reduced in Paris in order to frighten off car drivers, a fee of 8 euros is now being charged in London for each car wanting to enter the city center. This measure has been in effect since 17 February this year.

Paris Plage should be seen as a preparatory, didactic campaign. A campaign to make the city more attractive to Parisians. To fill the Summer « hole » but also to allow the inhabitants, including car drivers, to discover the qualities of today’s roadway areas and to show how the quality of life can be improved by blocking them off. The citizen is no longer ignored in the decisions of the city fathers but is cleverly involved and motivated as well.

When Paris Plage opened, the deputy mayor, Denis Baupin, who is responsible for transport, was highly enthusiastic in his comments on the Seine riverbank, which has been registered as a World Heritage site since 1991: « The desire to definitively regain this bank of the Seine will become so strong that closing it off to car traffic will simply be unavoidable. »