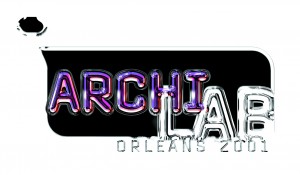 As in past years, the curators Marie-Ange Brayer and Béatrice Simonot offered innovative architectural research programs, exploring the range of approaches and projects of the participating architects. Their goal is to create, through an openness and curiosity toward all innovative movements, a space for a creative discussion about the challenges of architecture today.

Since its beginning in 1999, Archilab has become a landmark event for up-and-coming architects from around the world. In just four years, the work of 140 teams of architects has been exhibited, and over 300 architects and critics have come to Orléans to participate in a raft of meetings, events, and discussions for a cumulative audience of around 50,000.

Organized by the City of Orléans, this event has the support of the Regional Center for Contemporary Art (FRAC Center), whose activities and sphere of influence in architectural circles are outstanding. These conferences have turned the town into an international forum for architectural debate.

In previous years, Archilab raised questions about the architect’s changing profession, new urban phenomena throughout the world, and the choices for dwellings between individualization and standardization. 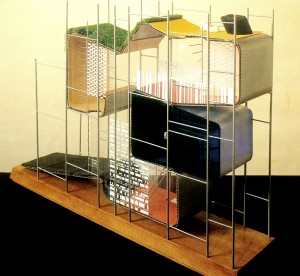 On no less expansive a scale, this year’s Archilab 2002 focused on a set of issues which concerns every citizen, the environment, broadly defined to include natural and urban, digital and informational, cultural and political.

The 30 architects invited this year put forward particular approaches and methods for choosing materials, designing buildings, and tailoring the site in relationship to its context. All raised the issue of the temporal dynamic of architecture, and architecture’s adaptability to new movements and flows: human, urban, and technological.

This year, as evidence of the event’s strengthening roots in the cultural life of Orléans, several cultural institutions became partners in conference organizing. The Museum of Fine Arts hosted an exhibition about American architect James Wines; the Institute of Visual Arts and the Media Library held an exhibition called « Morphogénèses, » and the FRAC Center presented the work of 11 schools of architecture.

One of the younger exhibiting teams was the Japanese architecture firm Atelier Bow-Wow. Their presentation included a series of small houses in Tokyo. The ordinary but well designed houses are planted on small sites and integrated in the townscape, successfully reflecting the everyday life of their inhabitants. 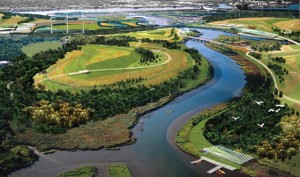 The award-winning project, « Field Operations Office » for the rehabilitation of New York’s Fresh Kills Landfill, was based on the formulation of a busy matrix of lines (« threads »), surfaces (« mats ») and « clusters, » organizing an alternative landscape on the site.

An aviary developed by the Spanish firm, Cloud 9, conveys ideas about the interaction between people and their environment, between observer and observed, and between inside and out. This is at once a huge artificial tree and a new « natural » topography of seaside dunes.

Meshwork, which Dagmar Richter Studio has been working on since 2000, is an urban project for a problematic neighborhood on the outskirts of Wolfen Nord in the former East Germany. Basing her idea on statistical data — pollen counts and pedestrian traffic for instance — Richter proposes an active diagram and an operational model capable of introducing alternative strategies for recycling and retrieving this abandoned landscape.

The Japanese firm Tezuka Architects already has to its credit a dozen or so completed private houses, which appear to be unusual variations on the same theme. Each one develops a special connection between the domestic and the natural: living with light, the wind, the sea, the landscape. On display at Archilab was the firm’s Roof House, in which an extensive, gently sloping roof duplicates the house’s interior layout and functions. 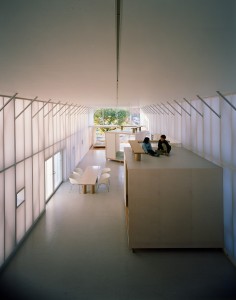 Through the substantial work of its commissioners and their team, Archilab has reached an exceptional position among annual architecture meetings in Europe. However, after four years of intensive work, the energy seems to be waning.

This year’s exhibition reached its peak in public attention, with attendance by a large international press and the personal inauguration by the French minister of culture. But neither the roundtables nor the exhibitions reached the same level.

The rare and courageous openness towards all the different approaches to architectural topics should certainly be to Archilab’s advantage, but this year it has turned to its disadvantage. Not limiting the conference topic opens many possibilities, but it also creates a kind of disorder in which visitors can lose their way.

The selected projects had such a broad relationship to « Earth Economics » that the topic began to lose its meaning. Many visitors wandered aimlessly on the different levels of the old military warehouse that housed the exhibits. It was easy to get lost between the extensive and costly but often incomprehensibly presented works. Each project had its own quality but it was at times hard to find the connections between them.

Archilab is a important component of the European architecture scene today and is hardly replaceable. But maybe it is time for some organizational refocusing to continue the annual event with the high quality we have enjoyed so far.